The exhibit will bring recent political topics to light through multimedia.

“I was really thinking about media in general, kind of social media, but the media files and sense of media news and stuff like that, particularly this time of day, and how much of our experiences are shaped by that or idea of reality is shaped by that," Chicago-based artist Kirsten Leenaars said. "I'm fascinated with the fact that our current president had a reality show. And so I feel like a lot of our reality is shaped by what we constantly see and do on TV or on social media."

The show was created by interdisciplinary video by Leenaars. Different to past exhibits, Leenaars focuses on the participation and performance work of the show.

“I'm very excited because this is a multimedia exhibition. So, I always like to see the fusion between video and audio and physical works of art on the walls and in the space. I think it's going to be a really exciting sensory experience,” Director of Communications at the Broad Art Museum, Morgan Butts, said.

Leenaars said she used this show to bring to light the different aspects of media people are exposed to.“I think what I'm really excited about this show is that it's really multi-layered. There's a lot going on. There's double sided video projection,” Leenaars said. “ ... So, it's really an environment that you step into, in a way that I feel, in our own daily life we're navigating a lot of different platforms and things that are coming to us. So, the show kind of, in a way, mimics that it's kind of all the different pieces are kind of competing for your attention as the viewer.”

One of the items featured is an audio recording of President Donald Trump’s inaugural speech in such constant repetition that the viewer can no longer make out the words that are being said. Leenaars and those involved in the exhibit said they feel the topics in the exhibit are topics that need a voice, specifically with young people. 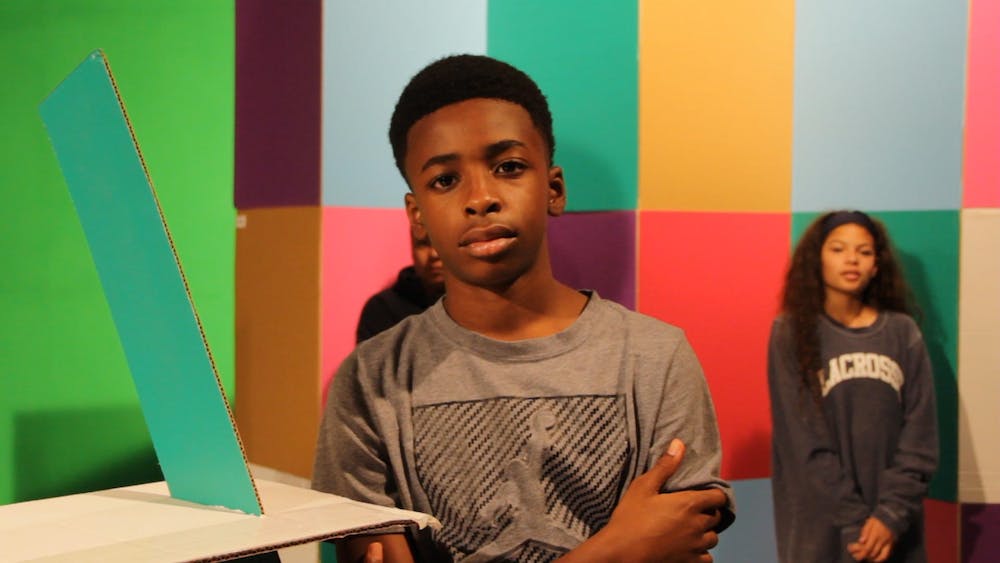 “It's really important that there's young people part of the making of the show and the content because I think, a lot of times, that's kind of being overlooked or not taken seriously. But, what I've also learned is that they (young people) do really have opinions and visions and ideas and concerns. So, I think it's important that they are represented and they have a platform to kind of show what's on their mind,” Leenaars said.

In order to truly represent young people, the show features a range of local students between the ages of 12 and 17.

Despite this being a way for youth to express themselves, Leenaars said she believes the true audience of the show is adults.

“I think it's also really a show for adults. And, I think it's really the content is super relevant. It's really commentary on today and what is going on today," Leenaars said. "I hope viewers kind of will think about the different ways they consume information or the way what they see shapes the way they relate to other people and maybe be a little more critical or aware of that."

Article by Wendy Guzman in The State News: https://statenews.com/article/2019/11/the-broadcast-broad-exhibit